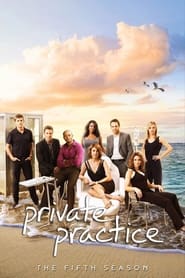 The fifth season of Private Practice premiered on September 29, 2011. It was announced on February 9, 2011 that Audra McDonald, who plays the character Naomi Bennett, will not return as a regular cast member in the fifth season, however she may return as a guest star or a recurring character. Following the departure of Audra McDonald, it was announced on March 20, 2011 that actor Benjamin Bratt will be added to the series as a regular cast member for the fifth season. The details of his character were released on August 7, as he is set to play Jake Reilly, an accomplished fertility specialist that is knowledgeable in cutting-edge technology and procedures. Later in the season, Cooper Freedman was revealed to have had an 8 year old son from a previous one-night stand. Son Mason is portrayed by child actor Griffin Gluck. While Gluck initially served as a guest star, he was promoted to series regular later on in the season. Gluck is notable for being the first child to be a series regular in Private Practice or in the original series Grey’s Anatomy.