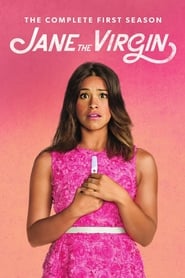 Jane the Virgin TV Series | Where to Watch?: Season 1

When Jane Villanueva was a young girl, her grandmother, Alba, convinced her women must protect their virginity at all costs. Now age 23, Jane is a driven young woman studying to become a teacher, nursing a dream to be a writer, and supporting herself with a job at a hot new Miami hotel. All the years of watching telenovelas with the two women who raised her – her sexy, young-at-heart mother, Xiomara, and her still-devout grandmother, Alba – have given Jane a slightly unrealistic view of romance. Still, she is determined not to make the same mistake her mother made – becoming an unwed mother at 16. Jane has managed to find a wonderful fiancé: a handsome, hard-working detective named Michael. All of Jane’s meticulous life plans are turned upside down, however, when she sees her doctor for a routine check-up and is accidentally artificially inseminated. Unbeknownst to her, the specimen belongs to Rafael, a reformed playboy and cancer survivor, who is not only the new owner of the hotel where Jane works but also a former summer crush of hers. Jane’s life has suddenly become as dramatic and complicated as the telenovelas she has always loved.