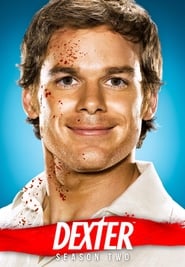 In season two, the bodies of Dexter’s victims are uncovered and an investigation is launched in Dexter’s own department to find the killer, dubbed the “Bay Harbor Butcher.” Debra struggles to recover, and Rita sends Dexter to Narcotics Anonymous meetings when she suspects that he has an addiction. Sergeant James Doakes, stalks Dexter, suspecting that he is connected with the “Ice Truck Killer” killings.