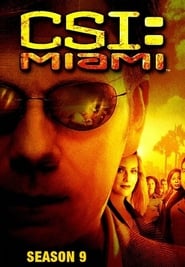 The ninth season of CSI: Miami premiered on CBS on October 3, 2010 and ended May 8, 2011. The show was on a special time Sunday 8/7c from January 2–16. Eddie Cibrian was written off the series and appeared as a special guest star for the premiere. Adam Rodriguez becomes a series regular again.