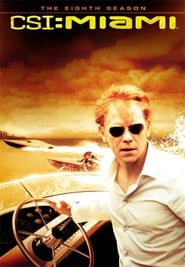 The eighth season of CSI: Miami premiered on CBS on September 21, 2009 and ended May 24, 2010. Eddie Cibrian joins the cast in the season premiere, along with Omar Benson Miller in episode 6. Christian Clemenson joins the show as the team’s new medical examiner. Adam Rodriguez was only a regular for five episodes and eight episodes as a special guest star. Khandi Alexander returned for two episodes also as a special guest star.