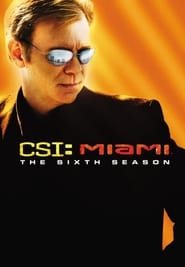 The 6 season of CSI: Miami premiered on CBS on September 24, 2007 and ended May 19, 2008. Khandi Alexander only appeared in 19 episodes and departed the cast as a series regular. Only 13 episodes had been completed before the 2007 Writers Guild of America strike. After the strike, eight more episodes were made, resulting in a 21 episode season.