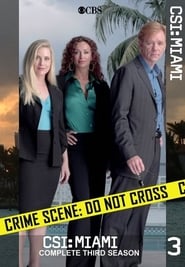 The third season of CSI: Miami premiered on CBS on September 20, 2004. The season finale aired on May 23, 2005. Rory Cochrane left the series after the season premiere. Jonathan Togo joined the show and was promoted to series regular. Rex Linn became a new recurring cast member. Episodes 7 and 16 have a net running time of 63 minutes.