The Special Projects team travels to Romania to search for Hetty, while delving into the history of the Comescu crime family, and their connection to Callen. Hetty confronts Alexa, matriach of the Comescu family, and it is revealed that Callen’s grandfather was an OSS agent who killed several members of the family; the Comescus retaliated, killing his mother, but leaving Callen and his sister alive. Meanwhile, Eric and Nell discover that Lauren Hunter, the Office of Special Projects’ Operations Manager, is a member of the Comescus. It is ultimately revealed that Hunter assumed the identity of Ilena Vadim – a member of the family who distanced herself from them – to infiltrate the Comescu family; the other members of the team are unaware of her exact allegiance until she kills Alexa and retrieves a laptop from the Comescu beach house. The episode ends in a cliffhanger with the other characters realizing that Hetty has been shot by Alexa. She then collapses to the ground, her fate unknown. 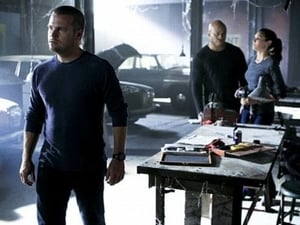