The CSIs investigate when the parents of a baby sitter in an upscale neighborhood are murdered. As the team sorts through the neighbors’ secrets and lies, they find an unexpected love triangle as a motive for murder. Meanwhile, a key piece of evidence found at the crime scene leads Horatio to expose a doctor with some dirty secrets of his own. 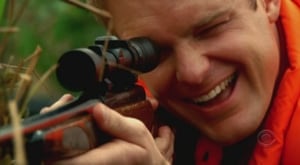