A truck carrying weapons that were confiscated from previous crimes are now back on the streets of Miami. An old enemy of Horatio’s puts the lives of two CSI’s in harms way after a confiscated missile is launched into courthouse allowing Clavo Cruz to escape during his arraignment and injuring one CSI and the fatality of another CSI. 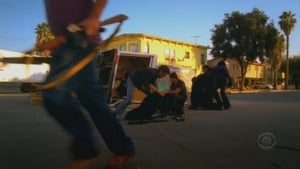