An extreme skateboarder and videogame tester is found dead on a half-pipe platform used to program extreme skateboarding video games. The CSIs discover that he was wearing reflective sensors when he was killed, so the motion-capture device used to produce these videogames recorded the murder as it happened, but not the murderer. Now the team delves into the highly competitive world of videogame programmers and testers to find the killer. 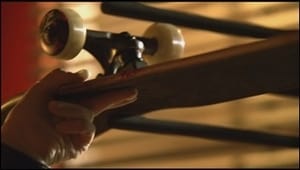